The 'Starbucks Effect' is a thing in real estate 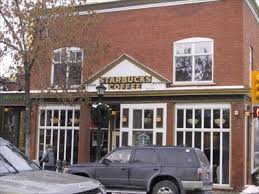 There are the usual factors we need to take into account when we choose a new neighbourhood like proximity to good schools, access to main roads, low crime stats, ecetera. Everyone has the same 'wants' pretty much.
But, one there's another new one, apparently — the 'Starbucks Effect' and stories I've read recently are telling me it is a real thing.
If you see a new Starbucks open up somewhere in Calgary it's supposed to be a sign that that neighbourhood is going to be a good buy eventually in terms of real estate.
Stuff I've read says that the company has a couple dozen analytics experts sequestered somewhere studying maps and data like traffic patterns and what other businesses are opening up nearby. They employ regional teams to do their own research on local factors before deciding on store locations; all so they can get into a community and get the best spot before someone else does.
I just Googled 'Starbucks in Calgary' and found out there are 50 locations in the city right now. I try to remember as many as I can if only for the free Wifi and because they are good spots for meeting people for the first time.
Now, having a Tim Hortons in your neighbourhood is another thing all together. Convenient yes maybe, but who wants one down the street? I remember a few years back hearing that the folks in Inglewood raised a stink when Tim's tried to open in their community. There isn't one there I don't believe so they obviously won the fight. A NIMBY to Timmy's. There's a Starbucks there kitty corner to Recordland and I've used their Internet a few times.
Having a Starbucks in your area can improve property values according to research done in the States, which revealed that between 1997 and 2014 properties within a quarter-mile of a Starbucks had their value rise by 96 per cent compared to 65 per cent for all others. I'm not sure about that and I'm sure not sure this is holding true in Canada  during this current challenging market.
However, if there's a Starbucks within walk distance of one of my listings I make mention of it in my description.

#105, 75 Crowfoot Rise NW
Calgary, AB T3G 4P5
Contact
Cell: 403-860-9525
homesinalberta@gmail.com
Contact Me
Powered by myRealPage.com
Data is supplied by Pillar 9™ MLS® System. Pillar 9™ is the owner of the copyright in its MLS®System. Data is deemed reliable but is not guaranteed accurate by Pillar 9™.
The trademarks MLS®, Multiple Listing Service® and the associated logos are owned by The Canadian Real Estate Association (CREA) and identify the quality of services provided by real estate professionals who are members of CREA. Used under license.